“…The most treasured things passed down from generation to generation are the family recipes.”
― Robert St. John

I come from a long line of exceptional women — both in and out of the kitchen. Growing up, I was always fed amazing food without having to cook. This may be why I have moments when I’m a culinary train wreck.

My mixed-European heritage was fully-embraced by the women who’ve preceded me in our family.  My paternal grandmother could turn German flavors like sauerbraten, spatzle, and potato pancakes with her eyes closed.  Her Irish stews and her soda bread were to die for. (I’ll share those soon!)

My other grandmother was Italian and made magic with her homemade raviolis, lasagna, ziti and sauces. My mouth waters remembering how their houses would smell; how their food was almost medicinal in the way it could make you feel comfort. 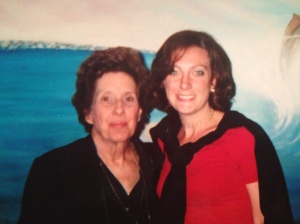 But I was stupid.  When my grandmothers were alive, I had no interest in learning the wonderful things they wanted to teach me.  My father’s mother died when I was 16 and in the throws of caring more about boys, music, and college.

My other grandmother died when I was 31.  Back then, I was more concerned with my career and the family I was about to create.  Earlier, when she was well enough to share her gift with me I thought:  why do I need to know how to cook?  I’m never going to need to know how to do that!!  I’m going to be a modern career girl, after all!

I didn’t realize that I was slamming a treasure box closed.

If you’re not smart, be lucky.  I am lucky because I still have my mom.  She has preserved, perfected and melded both of my grandmothers’ techniques and talents.  So when my garden started to yield a beautiful bounty of veggies, I called mom.

Let me be clear: my house is the house where plants come to die. Nothing green is safe in my presence.  But when we moved to our new home two years ago, I saw raised flower beds surrounded by a deer-proof fence and thought: this is my chance!

After two summers of successes and terrifically ugly failures, I found a beautiful array of eggplants, peppers, and oh-so-many tomatoes this week. 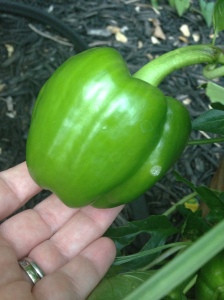 My mom suggested Grandma’s Stewed Eggplant.  I was wary. My 7-year-old is vehement about his hatred of all things eggplant.  But when he saw me pluck the eggplant he helped me plant in our garden, even he was excited.

I was excited, too.  As I cooked tonight, I could feel my grandmother in my kitchen with me.  She died just a few days after we found out we would be blessed with our oldest child. I’ve always wished she could have met our children.  So this was actually an emotional recipe for me to make and I really wanted the kids to love this.

I didn’t follow this exactly.  I had a lot of tomatoes that needed to be used today.  So I used one can of diced tomatoes, and then diced up 5 or 6 small fresh tomatoes from the garden and tossed them into the mix.  I also used a bit more oregano, to taste.  Oh… and I didn’t need to add flour.  Isn’t it just beautiful?!? 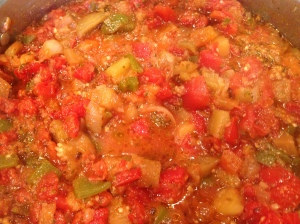 My mom suggested serving this on hard rolls or crostini with some melted mozzarella and parmesan cheese.  She even said you can serve it on sandwiches cold– sort of like a relish.  I think these are great ideas and I’ll try them in the future, but I chose to serve it over spaghetti and sprinkled parmesan on it in order to pass it off on my more-discerning family.  (Everything tastes great on spaghetti, right?!)

Everyone LOVED this, even our 7-year-old who was sure to redeclare his steadfast hate of eggplant (with this one exception!) The mixture was a hearty, flavorful, veggie-rich sauce. The eggplant was not bitter at all.  It was so soft, it could be mistaken for sauteed mushrooms.  The oregano married the eggplant and peppers brilliantly.

I couldn’t wait to call my mom to tell her the results. She was as happy as I was that it was a success.

I think Grandma would have been proud — in more ways than one.  I hope so.