A week or so ago, a reader asked me if I could post some ‘make-ahead’ meals. She’s a busy mom of three active, athletic boys and she wanted to know if I had any ideas for dinners that could be made in advance of those late afternoon activities.

That got me to thinking. Right now, our evenings are only taken over by our 6-year-old’s activities. But our 5-year-old will be starting a similar schedule next year. And our 3-year-old daughter isn’t far behind. Soon enough, my evenings will no longer be blissfully filled with kids doing puzzles while I grill and sauté and mix away. Instead I’ll be on soccer fields and baseball diamonds until 6:30-7:30pm and my Three Little Birds will need dinner STAT.

We have had a taste of this already. This year, after CCD and baseball and soccer practices, I would walk in the door at 6pm and need dinner immediately ready in order to avoid meltdowns. I often turned to my beloved crock pot. What sanity-seeking mom wouldn’t? And we had some regular fare in our rotation:

But now it’s summer. And as delicious as all of these meals are, I want the tastes of summer.

So last night, I sat down with my grocery store circular, my shopping list, and my computer to find some good make-aheads meals. I’ve come up with several, and my hopes, dreams, and aspirations for the week include making all of them and posting them here. 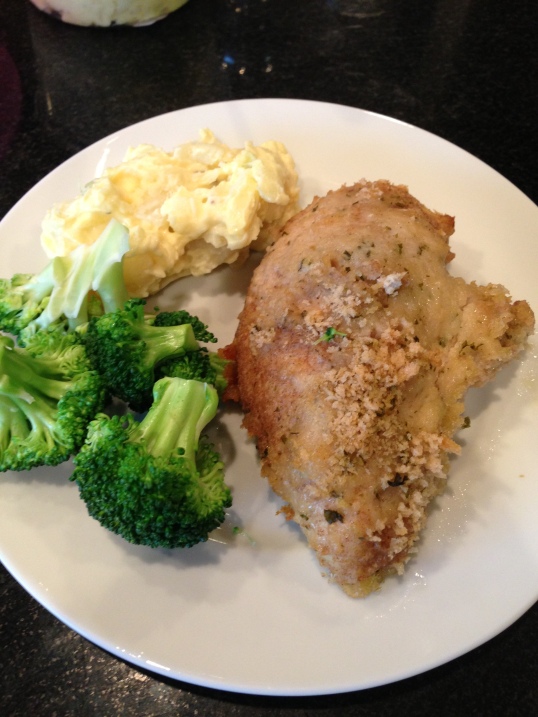 ‘Fried’ Chicken: I’ve ‘liked’ Skinny Slow Cooker on Facebook for a long time and am always ‘pinning’ and ‘liking’ their posts. Everything sounds so darn delicious! So when I was looking for a slow cooker recipe that wasn’t quite as heavy as the others in my repertoire, I naturally turned to this source first.

Tonight was a great night to try this. We had a little league game and didn’t get home until close to 6pm. I had seen this Skinny ‘Fried’ Chicken a while ago, and it kept nagging at me. How can you ‘fry’ chicken in a crock pot? They seem to have the answer. Here’s the recipe I followed, although I didn’t have buttermilk on hand. So I made my own buttermilk by mixing a little less than a cup of milk with 1 Tbsp of lemon juice. (I’ve read that you can also use white vinegar in place of the lemon juice.)

I’m sure it was an error on my part (I think I’ve previously mentioned that I’m a bit of a monster in the kitchen) but the chicken emerged from the crock pot more mushy than fried. It was delicious and moist, but definitely not crunchy.

Also, I thought the spices could use a bit more something-something — a little pepper? A little garlic? Perhaps I didn’t add enough salt. I don’t know. I just needed a little more oomph.

I’m so sad, because I’m a cult fan of the Skinny Slow Cooker gals. But I’d definitely try making this again. The kids all ate it. So did the Hubs. But I could probably make it again with better results. Let me know if you try this and have a better outcome.

Steamed Broccoli: I made this in my favorite kitchen tool. Ever. It’s Pampered Chef’s Micro-Cooker.

I bought it way-back-when in my single days and it’s been with me through 3 moves, the making of a family and countless dinners. You chop your broccoli, add about 1-inch water, cover and microwave for 1:30-2 minutes. Done. Steamed veggies. If you chop your veggies and have this ready in your fridge to just pop in the microwave, you’ll be done with dinner in no time. I use this ALOT and you’ll see if often this summer! Asparagus, green beans, snap peas. They all are awesome when steamed in this. And they’re done in seconds.

Potato Salad: Confession — (you’ll se a lot of ‘confessions.’ I’m Catholic, after all. We’re all about that!) — I didn’t make the potato salad. I was standing in line at the deli counter today and it looked good to me. So I picked some up. Sue me. It WAS good. You’ll notice I like to cook — but I’m relatively lazy. So if I need to supplement a meal with a store-bought side, so be it. (although my mom makes KILLER potato salad, which I really need to make and post here.)

I’m not going to tell you what’s planned for tomorrow because right now I’m debating between two different menus. But I will say they’re both good meals to come home to after an afternoon at the pool!

Who’s counting down to summer with me???