So there I was: hanging out, posting some blogs when — WHAM! It hit me! The End of the School Year! And suddenly, all of my own personal extra-curricular activities stopped. Hence the lull in my posts.

But my kids still need to eat, so the cooking (and eating out) continued.

Oh yes. I ‘phone it in’ — a lot. Over the past few days, we had sushi one night; the kids had chicken nuggets when the Hubs and I went out with friends; we had hot dogs at a baseball game.

But I did make a couple of yummy dishes that I wanted to share with you: 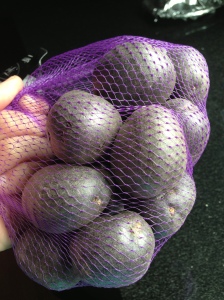 My daughter and I spied these purple beauties while shopping on Sunday. Immediately, I thought to myself: “Will the kids eat these?!????” I just had to give them a try. When I brought them home and my 6yo spotted them on the counter, he was also intrigued. So my hopes were high. I mean — just look at how beautiful they are! 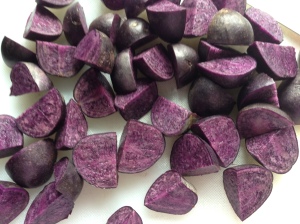 Since I was trying this as part of another make-ahead meal, I didn’t want to roast or grill them. A potato salad seemed to be in order. But I wanted one that is mayo-free, as I was pairing it with crab rolls for dinner (don’t worry — I’ll get to those crab rolls in a minute.)

I found this recipe for Mayo-free Picnic Potato Salad online and used it as my launching point to come up with this: 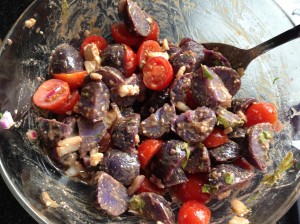 *ps: I made this in the morning. Total time: about 15 minutes.

*ps2: I initially stuck to the original recipe, but thought the results were a bit — well… icky-looking (here’s the before picture.)

That’s why I added the spinach and tomatoes to give it a little color. I think it helped in the presentation (and the taste!)

The results: My 5 yo son ate every bite. My 3 yo daughter ate it, under duress of a potentially canceled dessert. The 6 yo who spied the potatoes on the counter and thought they were ‘awesome!’ didn’t want anything to do with them. The Hubs liked it but quipped: “you can’t taste the purple!”

He shouldn’t worry. There are some leftover purple potatoes still in my pantry. We’ll come up with something he’ll like. 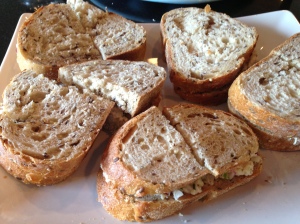 I teamed the potato salad with some crab salad sandwiches. These were supposed to be crab rolls, but after I made the crab salad I found my hot dog rolls had gone moldy. So I improvised and put it on some yummy whole-grain bread from the bakery.

Here’s the recipe I used — from one of my favorite magazines, Real Simple. And true to the magazine’s motto: it really was Real Simple. Total time to whip this up and throw in the fridge: 10 minutes (15 minutes with a preschooler tugging at your leg.)

Results: These were a success with my boys who even ate second-and-third helpings of the crab salad by the spoonful. My 3yo was a tougher sell and actually spit it out. My husband said he would have preferred it on the hot dog buns. Personally, I felt these sandwiches would have benefited from some crisp lettuce and thick slices of tomato. 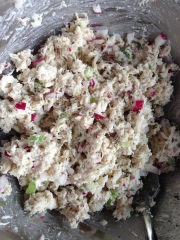 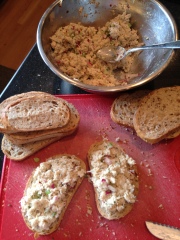 But I liked that I could make these in advance and that they were ready to pull out of the fridge after a busy day. And I really like how summery they are — perfect for dinner after a day at the pool! (or even for a picnic at the pool!) 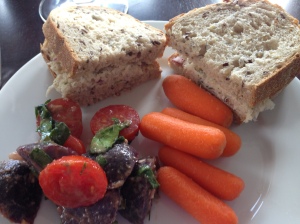 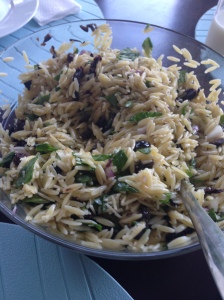 My dear friend was coming for dinner, so I made a tried-and-true family favorite: Cooking Light’s Honey Chicken Thighs. (I make this minus the spicy ingredients — they can’t be easier.)

But I needed a quick-and-easy side dish. If you’ve been reading this blog closely, you already know where I went for inspiration– the pantry!

I found a box of orzo, a package of sun-dried tomatoes and a can of black olives. Then I hit the fridge and found the spinach. Voila!

Results: I really liked this dish, but the Hubs isn’t a fan of sun-dried tomatoes. So he was just so-so on this. My 6yo picked all of the tomatoes out, but liked the rest of it. My 3yo daughter loved it. And my 5 yo — who adamantly does not like orzo — LOVED this (I think it had something to do with the savory olives and sun-dried tomatoes!)

Something I might try the next time: I’ll make this again — but will use fewer sun-dried tomatoes. And if I want to make this dish pool-side picnic ready for the summer, I might toss in some shredded chicken and sprinkle it all with some fresh lemon juice.

Here it is plated with the honey-chicken and some steamed green beans with almonds. Pretty, right? 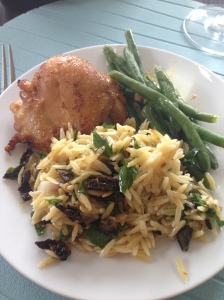 Let me know what’s cookin’ in your kitchen!